Dovetales is back this Sunday, February 3, 2019 with an extraordinary testimony from Walt Heyer who lived as a transgender woman for 8 years. Walt will share with our listener’s not only his life as a woman, but the accounts which led him to de-transitioning back to a male over 25 years ago. Folks, please know first and foremost that Dovetales is about guest’s sharing their personal story of how they found Christ through their trials as they courageously share all that has happened to them. Though Dovetales is a Christ-centered program, discussing this sensitive topic, my attempt as host is not to condemn or speak poorly about those that struggle or find themselves at peace with gender reassignment. I am excited that I have an opportunity, through Walt Heyer’s testimony, to understand the many complicated layers and struggles of gender reassignment and the mentality behind this guest’s de-transitioning BACK to male( from female) with the love and support of a church family willing to walk with him through the process. Make no mistake, we all struggle with identity or the need to “like ourselves” within the skin, we are in. The conversation ( not debate) begins 2:30 pm eastern time. Join us with an open mind, heart, and no judgement as the Holy Spirit leads us into all truth.

More about my guest: Walt Heyer

Walt Heyer lived as a transgender woman for  8 years, detransitioned back to male over 25 years ago, and now uses his 74 years of transgender life experience to bring a message of hope to others who want to know how to detransition like he did. Heyer unapologetically refused to live out his life as a transgender female. Instead, with the unconditional love and support of a church family who was willing to walk with him through the messy process, Heyer looked to Jesus Christ and was redeemed and restored to his male identity.

Heyer’s fascinating story is told in his autobiography, A Transgender’s Faith, and has been the subject of numerous documentaries, such as Pure Passion Media’s TranZformed: Finding Peace with Your God-Given Gender” and RT TV’s “I want my sex back.” Two of his articles at The Public Discourse earned a place on the list of most popular articles of the last ten years. 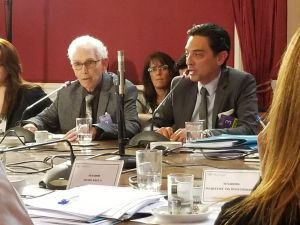 An accomplished speaker, Heyer travels extensively to share his story of redemption at conferences, churches and universities worldwide.

Heyer lives happily with his wife of 21 years.