We are back folks, as promised, while teaming up with Mixed Media Artist and Creative Mind behind the online magazine Putting on the New with Cherie Burbach. DCL Ministries loves contributing  articles every 4th Sunday, as us ladies unpack what we go through when saying “YES!” to God’s way and forsaking our own way. I experienced my rebirth April 26, 2006 and though I have never looked back, I am grateful to have like-minded people on this life journey . Enjoy this article on this Sunday afternoon.

To read more inspiring articles with Putting On The New, click here. 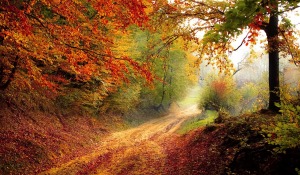 “The disciples went and did as Jesus had instructed them. They brought the donkey and the colt, placed their cloaks on them, and Jesus sat on them. A very large crowd spread their cloaks on the road, while others cut branches from the trees and spread them on the road. The crowds that went ahead of him and those that followed shouted, “Hosanna to the Son of David!” ” Blessed is he who comes in the name of the Lord!” “Hosanna in the highest!” Matthew 21:6-9.

Fall is my favorite season, because I can throw on a sweatshirt, jeans and still put on a pair of flip-flops so I can wiggle my toes around–free from socks. Saying goodbye each year to summer never gets easy, but much like this text I must prepare for the change to come regardless. Transition into a new season of life when you’ve adjusted and gotten cozy in the last season can be a mental fight. Many times I struggle, because I don’t want to turn on my heat inviting an increased bill, I don’t look forward to the bitter cold temperatures following the short lived, but beautiful sea of colorful Fall trees outside my door. I don’t want to wear snow boots, scarves, hats, and gloves covering everything but my eyes. But, every year I make preparations for the seasonal change that will come–whether I like it or not.

Though we might struggle with the unknown as we draw near to our destiny and purpose we must , as disciples of Christ, do as He has instructed much like the people who prepared the road with branches and the donkey with their cloaks. Today, we all know the sequence of events which laid ahead for Christ after his triumphal entry into Jerusalem, but the tone of the text implies the opposite feeling and not one of sorrow as one might assume. This text is invigorating, full of anticipation, excitement with  a tangible frenzy blanketing this joyous meet and greet occasion, an occasion resulting in a stirring of untold and unforeseen blessings coming humanity’s way!

Maybe that is the point my friends. Jesus’ return to Jerusalem is labeled “Triumphal Entry,”  because it was triumphant! He chose to lay down His life for all mankind so that our change of season (Salvation) could actually be possible. Those that believe need not fear change, because Jesus has already been on the same road that we now travel and He has equipped all mankind with the tools to go forth toward their purpose and claim their storybook ending. As I read this text, I became excited and expectant of great things which lay ahead, because as His disciple I’ve done what He has asked and now I too am screaming out for all to hear, “Blessed is he who comes in the name of the Lord!”

May we all know that change is most certainly good and often necessary. We only need to prepare with a heart posture eager, waiting AND EXCITED!