I hope you have all been enjoying Dovetales this year. The quests are simply extraordinary and as we make our way into 2018 I’d like to introduce you to a man that seemed to do the impossible when no one thought he could– the Iron Man known as Todd Crandell. Folks, sometimes it’s in our ruin that we stumble and find the road to transformation. Personally, I have found when in the Lord’s presence, transform we must– and transform we do! For Todd, it was a life addicted to drugs and alcohol and not only did he lose family and friends, but he also lost any chance of a professional hockey career. But, have you heard, just when you think all is lost and the road ahead seems impossible, it is surrendering to the process with the Holy Spirit that we learn that it’s the Almighty God who starts at impossible. Todd Crandell quit drugs and alcohol April 15, 1993 and now his mission is to prevent all forms of substance abuse by promoting a lifestyle of fitness and health for all those affected by addiction. So, join me Sunday, December 17, 2017 as I interview an ordinary man who found himself in Christ while running triathlon events and inspiring others on their road to sobriety while”Racing for Recovery.” Don’t miss it at 2:30 pm eastern time. Enjoy… 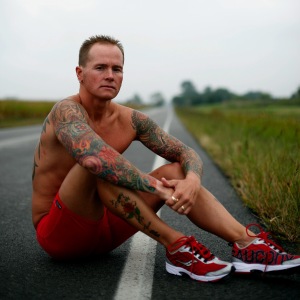 Todd’s own 13-year struggle with drugs and alcohol nearly destroyed his life, devastated relationships with family and friends and shattered the promise of a professional hockey career.He quit using drugs and alcohol on April 15, 1993, and has been sober ever since. In the process of rebuilding his life,Todd realized traditional recovery programs weren’t enough. He needed something more. He chose the most grueling sport imaginable, the Iron man Triathlon(a 2.4 mile swim, 112 mile bike ride, and 26.2 mile full marathon run).Todd ran his first triathlon in 1999 and has never stopped.In 2001, his experience with running triathlon events and seeing how it inspired others on their road to sobriety, led him to form the nonprofit organization Racing for Recovery®.Todd has completed 26 full length Iron man Triathlons across the world. In 2008 he was the only person in the world to complete the Ultra man Hawaii Triathlon (a 3 day test of endurance consisting of 6.2 miles of swimming and 90 miles of biking — day 1, 171.2 miles of biking — day 2 and 52.4 miles of running — day 3) and six days later complete Iron man Western Australia. In 2009, Todd completed Ultra man Canada, and became one of 25 individuals in the world to have completed both Ultra man Triathlons.

Our mission is achieved by offering individuals, their friends
and families, the opportunity to participate in one-on-one or group counseling sessions, free support group meetings,Team Racing for Recovery (an online community support system), as well as real-time social media conversations.

According to the Department of Health and Human Services, “an estimated 22 million American’s are classified with a substance dependence or abuse disorder…” — Founded in 2001 by Todd Crandell, Racing for Recovery® works to prevent addiction, save lives and improve the quality of life for substance abusers, their friends and family, by promoting a lifestyle of health, fitness and sobriety.
Todd Crandell travels the country to spread the mission of Racing for Recovery®. His message of hope and inspiration resonates in boardrooms and high school auditoriums with as much power as it does in jail cells and drug rehabilitation centers.