Dovetales has been on such an amazing journey and I hope you have been inspired, empowered, and motivated to move toward your purpose, while claiming what God has for you. But, Dovetales has only just begun to tease your ears and soothe your hearts. Therefore, we are back this Sunday, July 16, 2017 at 2:30 pm eastern time(US) as we unpack the extraordinary testimony of the Spanish- American businesswoman, internationally recognized speaker, entrepreneur, philanthropist, founder and CEO of BBES, a New York-based business which represents, promotes and markets brands internationally. I am honored to have my sister and friend share her heart and journey with us. Bisila Bokoko is a leader, but we all know great leaders also endure great struggle. Many times it is the leader who must choose the “hard yes,” see potential where there isn’t any, pass up on a business deal, while taking a chance on a nobody. Bisila understands business, but she also knows the art of great service–God’s way. To tune into the show, go to http://tobtr.com/10116535. 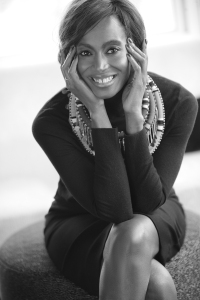 Bisila Bokoko is an internationally recognized speaker, entrepreneur, and leader specializing in international trade. She has been feautured in Forbes, Entrepreneur Magazine, Bloomberg TV, Black Enterprise, Harper’s Bazaar & other top publications. Ms. Bokoko is an award-winning businesswoman with an impressive track record of taking international companies from local to global. As the Executive Director of the Spain-US Chamber of Commerce for 7 years, she worked closely with leading Spanish brands including ZARA, MANGO and DESIGUAL. Bokoko transitioned to entrepreneurship with the launch of BBES, her consulting company in 2012. Since launching her company, she has helped companies in Europe and Africa in the areas of diversity and inclusion. Bokoko serves as a mentor to emerging leaders providing guidance on personal branding and leadership, as well as serving as an expert speaker at conferences and workshops. Bokoko’s efforts have won her widespread recognition and led to dynamic involvement in EMPRETEC, a United Nations programme that supports up and coming entrepreneurs.

Ms. Bokoko fronted the women’s scheme and actively worked to support female entrepreneurs in their efforts to launch hard hitting businesses. She herself is the face of “Bisila Wines”, her namesake global award-winning drop made in Spain. From hosting at the UN in Switzerland to delivering powerful keynotes in Dominican Republic and on-air radio hosting in South Africa, Bisila Bokoko has shared her business expertise and inspirational journey to audiences the world over. Throughout her career, Bokoko has developed and cultivated relationships with foreign Heads of State and international business leaders, instrumental in her becoming one of the ten most influential Spanish women in American business. Bokoko earned a MBA in Business Administration and Economics in Madrid from San Pablo University and holds a M.A in International Relations from City University of New York.

She is the global ambassador for Liceu Barcelona Opera House US Foundation, board member for the World Policy Institute and founder of BBALP: a non-profit organization committed to opening libraries throughout Africa with current presence in Ghana, Zimbabwe, Kenya and Uganda.